Posted | Views: 2,282
us embassy made a mistake.
us born Cuban Americans aren't Cubans after all.
So, if you follow news on Cuba or have been following this blog you would of been aware of the huge controversy regarding US born Cuban Americans traveling to Cuba. Posted on the US Embassy website in plain sight about a week ago it stated that if you were born in the US of Cuban parentage that the Cuban government does not recognize you as an American citizen. People were going into a frenzy. Some even acting like it was a conspiracy by Miami's Cuban community opposed to current travel. Hogwash. I think it's safe to say nobody should really trust the power brokers in Cuba and the fact something of this magnitude was published on a the US embassy website was enough to set Cuban Americans off.
First things first, we are Americans and going to a small communist island where they dictate if we are Americans or Cubans was utterly ridiculous but believable for Cuba's past actions. Well, turns out that it was all a big mistake and "typo" on the the embassy website.
While Cuban Americans born in Cuba are classified by the Cuban government as solely Cuban and are denied certain rights when planning travel back to the island nation, Americans born to Cuban-born parents are not denied any rights. Children born in the United States to Cuban-born parents are classified as American and are treated as such.
On Thursday, a State Department Spokesperson acknowledged the inaccurate information posted on the United States Embassy in Havana's website.
"Through our Consular Information Program, the Department of State provides information to U.S. citizens traveling and residing abroad to assist them in making well-informed travel decisions. It was brought to our attention that we were providing inaccurate information on our website regarding children born in the U.S. to Cuban-born parents. We have corrected that inaccurate information,” the statement said.
From WSVN: 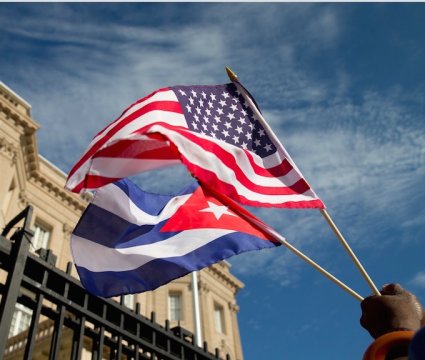