Posted | Views: 4,771
HAVANA (CBSMiami) – The U.S. Embassy has highlighted some bizarre practices by the Cuban government that could trip up Cuban-American citizens traveling to the island nation.
According to the U.S. Embassy, “The Government of Cuba does not recognize the U.S. nationality of U.S. citizens who are Cuban-born or are the children of Cuban parents.” Yes, you read that right. Cuba’s government will label you a full-blown Cuban even if you were born on U.S. soil.U.S. officials said Cuba may even force you to enter and depart using a Cuban passport.
While doing so wouldn’t hinder your U.S. citizenship, you still need your U.S. passport to enter and depart the United States.
cuban americans beware:
visit cuba and the
cuban government
might not let you leave.
You can't even make this stuff up anymore. While opportunistic celebrities, fashion designers and artists flock to Cuba as this hip place to be, there are some real troubling realities for Cuban Americans wanting to visit the island. Some Cuban Americans to begin with only travel to the island to visit family and don't really vacation there in the more traditional sense of leisure travel.
Well, now you can't even visit your family without the possibility of the Cuban government snatching away your right to leave. Yes, you heard right...if you were born in the US to Cuban born parents, Cuba does not recognize you as an American citizen. Cuban authorities can keep you in Cuba and make you join the military. If you are a teenager or within the age requirements you can be at risk the most for being drafted. This should outrage everyone in the US. We should expect more from our elected officials about how Cuban Americans who left everything behind from oppression should be treated. Turn off the reality TV and wake up!
From CBS Miami 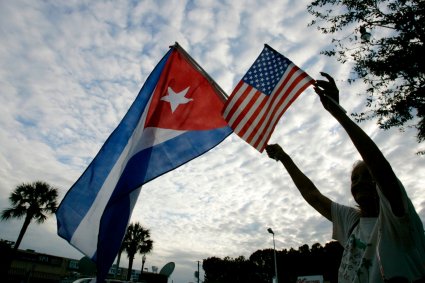 “The Government of Cuba does not recognize the U.S. nationality of U.S. citizens who are Cuban-born or are the children of Cuban parents.”

Abuela Mami Coffee
A Normal Day In Miami...
Diary of a Cuban who left Miami
Suffering from Pastelito Guilt?
Ingredients for a Political Cuban Sandwich
The Elena Ruz Sandwich Story