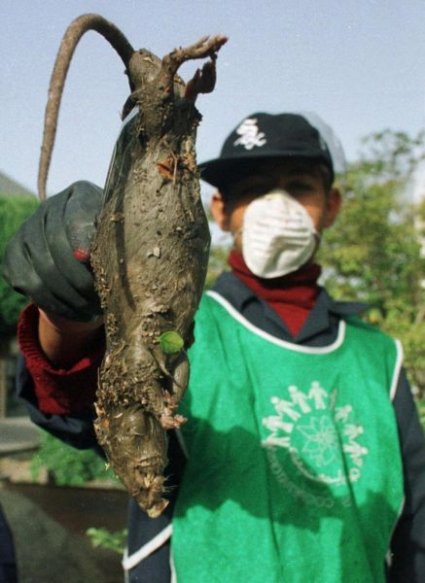 The Iranian capitol of Tehran is suffering from a pest problem we don’t envy — Rodents of Unusual Size have come to plague the city. While they’re not the nearly human sized creatures native to the Fire Swamp, Iranian officials have reported that the “genetically mutated” creatures weigh in at up to 11 pounds. That’s larger than some of the cats that prowl the city’s streets, and big enough to warrant government backed teams of snipers whose job is to hunt down the voluminous vermin, because of course they’re resistant to traditional poison. Of course they are.

More than 2,200 of the rats have been killed so far, their corpses either burned or buried in pits of lime — which seems like a bit much, really. I mean, these are rats you’re dealing with, not vampires. That said, if I had to dispose of an eleven pound rat, I’m not sure what I would think is the right way to do so. I would probably just run away screaming and never look back, so, hey, goa and and torch the things, Iran. What do I know?

Aside from the rather dubious “radiation” answer given by one city council member, there’s no telling yet what is responsible for the rats increased size. The resistance to poison isn’t unique to Iran, though, having been seen in rats throughout Europe, including these British rats. The problem is getting so bad that plans are in the works to raise the number of snipers on rat-hunting detail from 10 to 40 in the coming weeks.

So if you’ve got the rare but coveted ‘Giant Rats’ space on your Apocalypse Countdown Bingo card, now would probably be the time to cover that bad boy up. Congratulations, I guess?

I would want this as Wallpaper
The Crazy Ones
Casting Obama as Satan for "The Bible"
Paper Art, Paper Quilling "Starry Night"
Not Just Skin Deep
Tania Gaz