Beagle Learns To Catch With Paws

But he keeps eating and next week he expects to hit another Big Mac Milestone: On May 17, Gorske plans to consume his 25,000th Big Mac.

Gorske, 57, says that since birth his taste buds have fluctuated in sensitivity, possibly worsening when he worked inside tanks at a factory.

However, not knowing if he’ll taste the Big Macs has not dampened his love for the McDonald’s staple.

He began eating the high-calorie special sauce, lettuce, cheese, pickles, onions on a sesame seed bun burgers on May 17 in 1972.

Gorske has structured his eating habits so he will devour his 25,000th Big Mac at about 3 p.m. May 17 inside the McDonald’s at 699 S. Military Ave. — exactly 39 years since he drove his father’s Dodge Polara to the original McDonald’s on Military Avenue and fell in love with the sandwich.

A handful of days this year he ate one Big Mac so he would hit the milestone on his Big Mac anniversary.

“A person like me, I just don’t change too much,” Gorske said. “It’s pretty much two Big Macs a day. When I can travel to sporting events, I like to take my Big Mac along.”

May 17 will also be Gorske’s retirement party. He has spent 25 years as a scheduling officer inside the walls of Waupun Correctional Institution.

Gorske hopes to be surrounded by friends and family Tuesday at McDonald’s where the first 300 people will be getting Gorske buttons and free meal coupons.

He will also be showing three displays only viewed by his family and the Guinness Book of World Records — the receipts, 10,000 Big Mac cartons and calendars documenting his obsession. 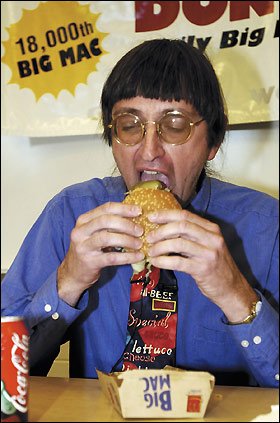 Most famous for appearing in the doc film on the ills of fast food "Super Size Me." The obsessive McDonalds eater Don Gorske annouces that he will be eating his 25,000th Big Mac next week. LOL