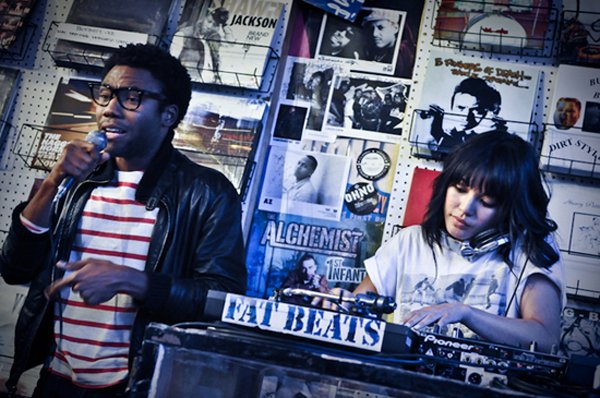 To know Donald Glover is to love his music. This may come as a shock to some who have only heard about him from his many other projects; Donald puts out his music independently under the name Childish Gambino. And while you may not find his tracks on the radio (yet) they’ve been all over the blogosphere for a while now and a new EP is coming out on March 8. We had a chance to catch up with this outspoken rising star, and we think you’ll dig it!

LF: How did you start rapping?

DG: I’ve been rapping since I was a kid. I would do it for fun at the table in school and one of my friends would start (he does a beat on the table). I went to a performing arts high school because my teacher said I was too rambunctious. I needed to release some of that stuff and performing arts school did it for me. So I started writing plays and doing music.

LF: Is it true that you got Childish Gambino from the Wu Tang name generator?

DG: Yeah – I met the Rza and he was like “Where’d you get your name from?” and I said actually it was from one of your name generators. And he goes “That’s a perfect name for you – Childish Gambino! It’s like the computer had a brain!.” I thought that was pretty awesome.

LF: You auditioned for SNL, right? Did you rap for Lorne Michaels?

DG: I auditioned twice. I didn’t rap. I did do an R. Kelly impersonation though.

LF: The Internet has started an alleged feud with you and the guys from Lonely Island. What’s up with that?

DG: We’re friends. There is a line on the Culdesac album “Cause this joke rap shit has gotten out of hand The only ones who do it well are Lonely Island”

- That’s the truth. I think they are really good. Mother Lover is one of my favorite songs. It’s better than Dick In a Box. I’ll just play it and… (he starts singing). They make their stuff so listenable. It’s genius. And it’s obvious they love it. I know there are some other articles that made some sort of a feud up about Derrick Comedy and Lonely Island but no, we’re friends. I love those guys