What do Vegan Zombies Eat?

Sean King, a second grade student at Meridian Ranch Elementary School in Falcon, Colorado, was given the assignment to do a living wax museum project regarding Dr. Martin Luther King.

Sean, reportedly a good student who enjoys school, is white and wore black makeup on his face as part of his costume for the project.
The young boy says that his classmates thought his costume was awesome.  School officials, however, thought otherwise.
When Sean's parents arrived at the school, they were told that Sean's costume was a problem.   Sean was told by the school principal that the black face paint had to be removed immediately or he would have to go home.
Sean's parents, Michelle and Anthony King, took the boy home.
After the incident, the mother said:

It's embarrassing.  It's sad for the kids and sad for Sean because he's a very good student.  He really thinks of school very highly. 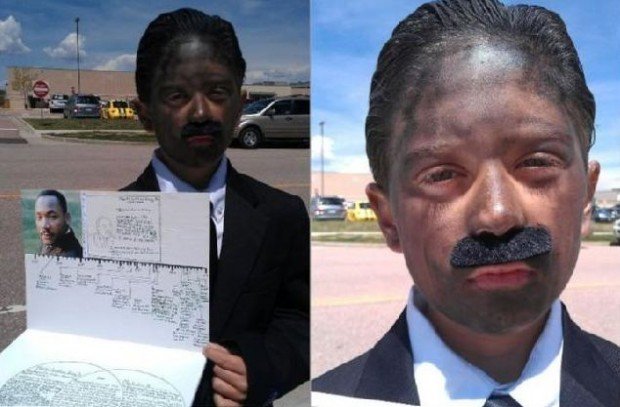 Second Grader Not Allowed to Portray MLK in

The school's staff would not say if Sean would be punished if he had refused to take off the makeup or if his grade will now be lowered regarding the incident.
According to the school district which supported the principal's decision:

When something becomes offensive or distracting, that's when it falls under the board policy of dress code, and making sure if something is distracting, that it's removed from the learning environment. The mother said that Sean was going to wash the paint off as soon as he was finished with his presentation and not cause a scene of any type.  Though distraught with the school's reaction to Sean's costume for his Martin Luther King, Jr. project, Michelle King says her son will attend the last week of school to finish out the school year.

Holi: Festival of Colors
The Mona Lisa Unwrapped
Life is when you don't sleep
Can't You Read The Sign?
Weird Cloud UFO Falls from the Sky
Scammers Target Online Dating