FINALLY, basement dwellers everywhere can get some action.

Scientists at the Kajimoto Laboratory at the University of Electro-Communications in Tokyo are developing a gadget that can digitally transmit the sensation of kissing.

The device consists of a straw attached to a hand-held box.

You stick the straw in your mouth — stop smirking — and twirl it around with your tongue.

The movement of your tongue is then replicated by a corresponding box, the straw of which should — ideally — be placed in your make-out partner's mouth.

Video footage of the kissing box published by diginfo.tv shows it in action — however it looks as if only one tongue's movements can be communicated at a time.

We assume that means that, as in a waltz, one member of the pair will have to take the lead to avoid a kissing box meltdown.

The boxes are connected via the internet and also apparently record the taste of a person's mouth, the manner of their breathing and moistness of the tongue.

They can also record customised kissing information, meaning it may be possible to emulate the kissing style of specific people.

Who knows — perhaps a clever marketer will team up with the university to sell kissing boxes based on celebrities.

Scientists are apparently bored and are developing a kissing device. It can record breathing patterns and your tongue movements sending it to your cyber lover via internet. 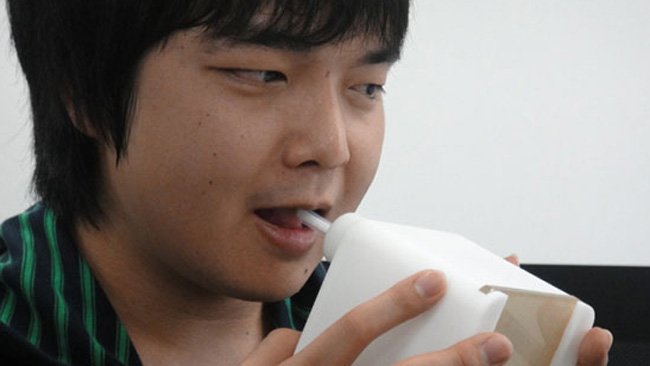 I Love London
In Memory of Ruby
Guinness Bailey's Float
Melissa Clarke, Wow
Nate Dogg Rest In Peace
The World Will Laugh With You...