Posted | Views: 10,312
Valdes’ work often draws a corollary between the content and action with surroundings punctuated by arid landscapes and fragmented spaces. In his work "Bullish in the Desert", the interaction between the dark colossal animal and the brightness of the hovering ghost-like figure is offset against the brightness of the warm tones of the landscape. This painting as well as others in the series, investigates the poetics and memories of the perpetuating Western American culture, re-enacting the artist’s own experience in the wilderness of Arizona.
Simultaneously entertaining and strikingly composed semi-abstract paintings, Kiki Valdes’ works are critical interrogations of the duality between the individual and the system, or in this case the ‘animal’. Tracing the conflicting broadcast of everyday uprising, the unleashed beast in "Angry Horse" exposes the overthrow of ongoing endorsed system, projecting the viewers in a mental state of a no-man’s land where the dignity of the animal and individual are one. Kiki Valdes approaches the lore of the American cowboy with an intimate immediacy, enabling his contemporary experience to exist within the continuum of civilizations.
Kiki Valdes was born in Miami, Florida in 1981, and lives and works between New York, New Jersey and Miami. A Cuban American painter, Valdes’ work explores the multidimensional complexities of people, religion, American-life, sex, and superstition. His canvases tend to overlap on top of various unresolved paintings and capture a sense of association, rhythm and conflict. Kiki often refers to his paintings as studies; instead of art history’s draw toward the female or still life, Valdes explores the use of 1990’s cartoons with expressionistic tendencies. His appropriation of Disney/Nickelodeon characters is a starting point for him to redefine his understanding of the subject. The work can best be described as a marriage between abstract expressionism and cartoons.
“Kiki Valdes: Riding Dualism” will be on view at The National Arts Club - 15 Gramercy Park South, New York NY. 10003. November 3-30th 2014. A reception will be held on November 19, 2014 from 6-8pm. RSVP required: [email protected]
Press Contact: [email protected] 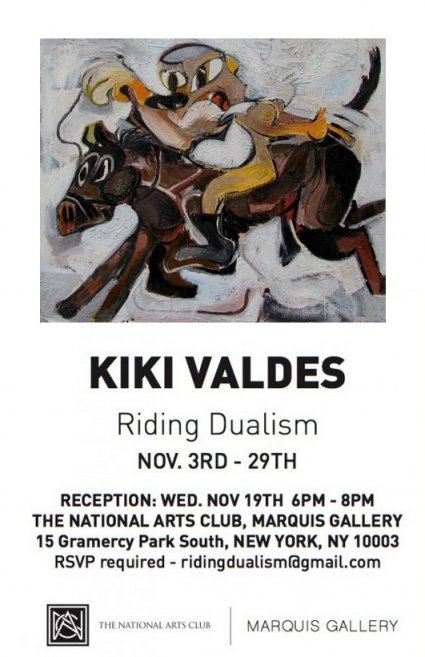 RIDING DUALISM, KIKI VALDES NEW EXHIBIT OPENS THIS NOVEMBER AT THE NATIONAL ARTS CLUB IN NYC.
For his first one-person exhibition in New York, Kiki Valdes presents new paintings that explore the phenomenon of dominance and the translation of experience into image and form. Continuing his inquiry into the evaluation of popular culture in the context of established American settings, Riding Dualism proposes a step further whereby traditions are re-explored and roles often reversed.