Julius Hofmann doesn’t illustrate invented stories. He portrays what is inside him: doubt and fear, possible danger and threats, and he plays with temptations, metamorphoses and masquerades. His stories come into being during painting, and are made with brushes and paint, and also with saws, cutters, cardboard, glue or on the computer. Their meaning changes, is expanded or deleted, often faster than they came into being. Julius Hofmann is a filmmaker. He’s a filmmaker, but above all he’s an actor, a make-up artist, a set designer, a cameraman, a editor, a sound engineer and director, all in one. His films, though few, are nevertheless of high quality, and compact in an oppressive way, just like his paintings, which look like condensed films. It is implied that things have happened and that afterwards anything is possible. A road to a dark forest, water that is devoured by the night, a shadow kingdom behind a wall. The young artist appears to have left behind trails, tempting us to look at something.

Hofmann feels connected to the romantic artists, who always left something open, something to guess at. Like them, he doesn’t feel comfortable with the classical harmony of ‘noble simplicity and silent greatness’. He’s closer to symbolism, just as Francis Bacon, who suppressed his doubts and loneliness with the images he made. But examples aren’t the starting point of the word of forms and motifs of Julius Hofmann. His starting point is the tension between the flood of media images that surrounds him, which he dissects with his keen glance, and the world of silence that he soaks up for his wealth of images and souls during his long cycle rides. In the beginning there is only chaos. Within that he starts weaving his threads and from that he constructs his paintings. Some have enticing, friendly colours, others are brightly coloured. There aren’t many figures, but they are full of symbolism. The most prominent character in the paintings and films is a man with a dog mask. The mask makes him both invisible and acts as a protective helmet, to combat villains and to suffer together with prisoners. Murderers appear too, but they already show the face of death. Femininity looks like cast porcelain and mobile technology is indispensable for the image world of the painter and sculptor. Here, he is a man of his time. But he is also someone who tests the designer’s harmonies and looks for the boundaries of destruction.

Julius Hofmann makes a breach in the wallpaper of our daily image mania and gives us a view of his world. Better yet: He tempts us to discover a counter-world that looks fierce in order to protect something fragile. (Bernd Sikora) 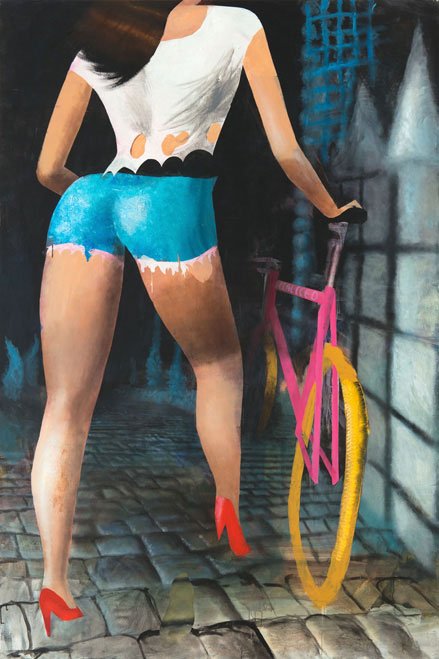 JULIUS HOFMANN
Scary things happen, like in the stories by the brothers Grimm, Hans Christian Andersen and E.T.A. Hoffmann. But no blood is drawn. No fingers are raised threateningly, no fingers are cut off and nobody is burnt. 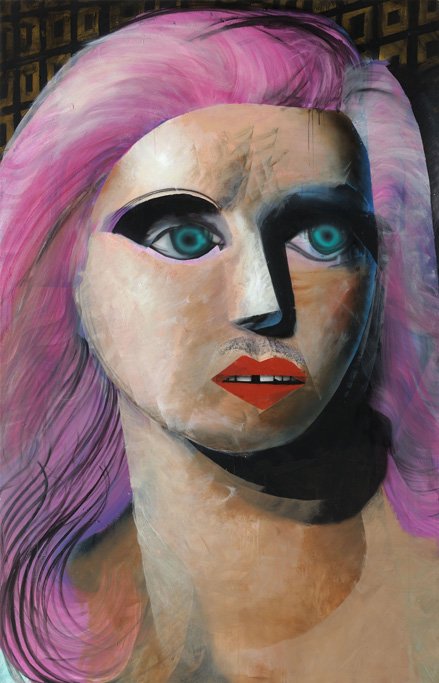 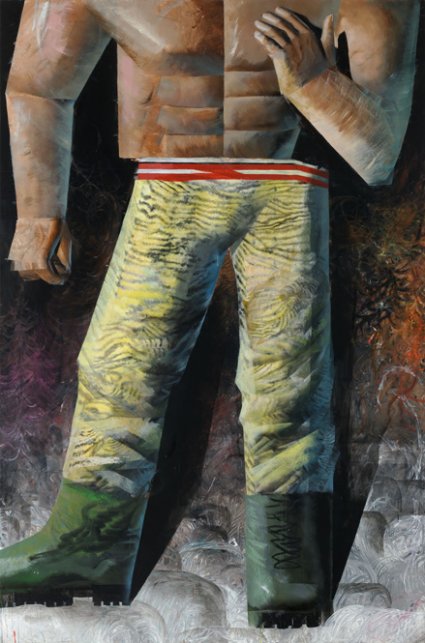