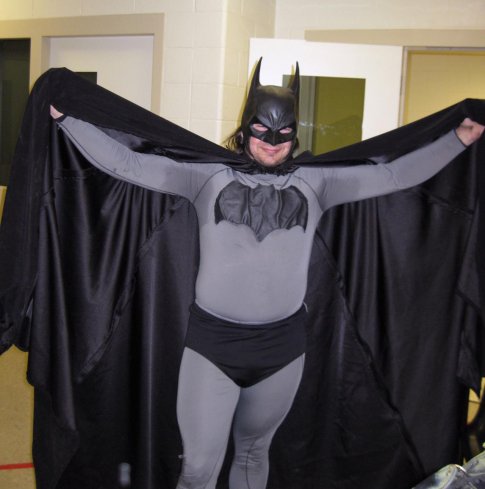 "He wouldn't clear the scene, and we had a canine out there and he kept screwing up the scent," State Police Sgt. Jeff Gorno told the Petoskey News-Review (http://bit.ly/QFv0yh ). "He said he wanted to help us look for the driver."

"We didn't want the dog to track Batman instead of the accident scene, and he was getting in the way of officers who had a job to do," the sergeant said.

Williams wasn't carrying any dangerous weapons, but his costume and gear were confiscated, Gorno said. He was charged with resisting and obstructing police in an investigation, and he posted bond and was released from the county jail. He is due back in court Oct. 18.

A call to a number listed as Williams' Petoskey home rang unanswered Wednesday.

It's not Williams' first brush with the law as the caped crusader.

He was arrested last year after police received a report of a man dressed as Batman on the roof of a Petoskey business. When officers arrived, they found Williams, dressed as Batman and carrying a baton-type striking weapon, a can of chemical irritant spray and a pair of sand-filled gloves.

PETOSKEY, Mich. (AP) — The search for a driver who fled an accident scene in northern Michigan over the weekend was apparently a job for a dog, not a bat.

State troopers arrested 33-year-old Mark Wayne Williams because they say he refused to leave them alone after he showed up Saturday night wearing a Batman outfit.