The ballsy folks at PCRM.org put up this show-stopping billboard in many different cities with the hopes of bringing awareness that there are studies that suggest Hot Dogs (and processed meats) cause colorectal cancer and/or increase the risks of it.  Read the press release below targeting baseball fans in Miami…

WASHINGTON — A huge billboard near the new Marlins Park stadium will warn fans that eating hot dogs can increase their risk of colorectal cancer. The billboard, sponsored by the nonprofit Physicians Committee for Responsible Medicine, reads “Hot Dogs Cause Butt Cancer” and directs readers to www.PCRM.org.

Hot Dogs Cause Butt Cancer: Processed meats increase colorectal cancer risk. The billboard, timed to coincide with the April 4 home opener of the 2012 baseball season in Miami, features a cartoon drawing of a man in a hospital gown, hot dog in one hand, perplexed eyes fixed on his protruding behind. It is located at 600 N.W. 57th Ave.

PCRM has also written to Miami Marlins owner Jeffrey Loria asking him to post warning signs about the link between processed meat and colorectal cancer anywhere in the stadium that hot dogs are sold.

The billboard’s blunt language was prompted by a recent survey showing that a surprising number—39 percent—of Americans do not know where their colon is. The survey also found that one in three Americans does not know what part of the body is more likely to get cancer as a result of eating processed meats frequently.

“A person who averages a hot dog each day increases his risk of colorectal cancer by 21 percent,” says PCRM nutrition education director Susan Levin, M.S., R.D. “And many people feed their children bacon for breakfast, hot dogs for lunch, and pepperoni pizza for dinner. The cumulative risk of all that processed meat can be enormous.” --- Keep reading 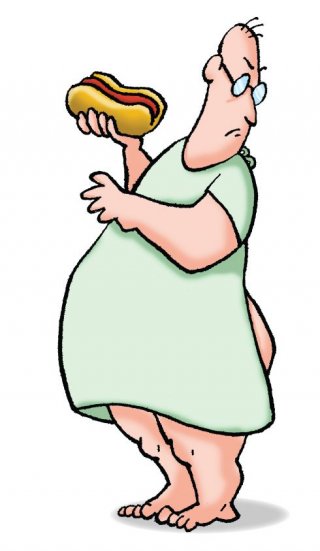