He really wants that Couch LOL

Did you know the 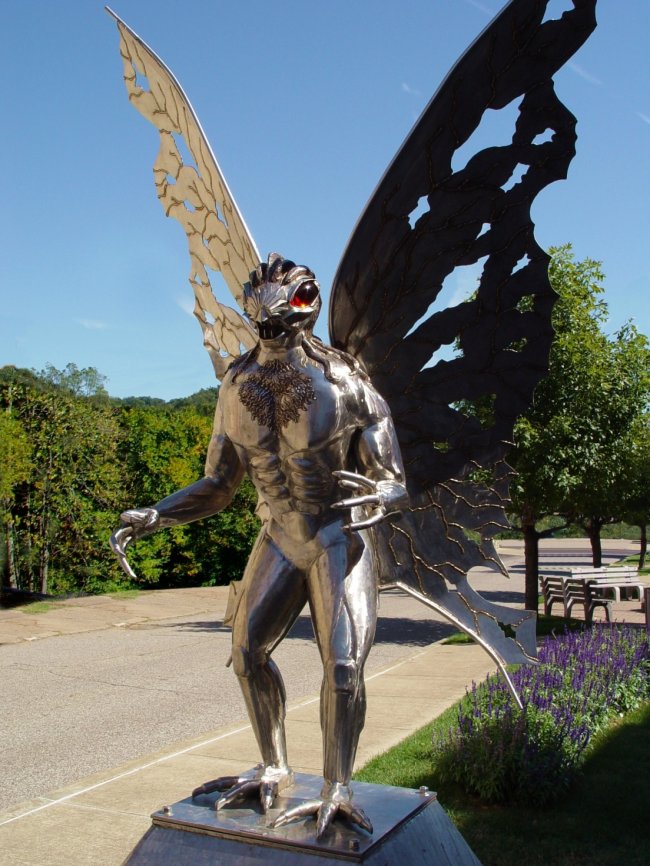 The state of West Virginia has played home to one of the most bizarre "pseudo-cryptids" ever reported, the unusual - but by no means, unique - Mothman.

The first sighting came in the early 1960s. A woman was driving along Route 2, near the Ohio River, with her father. As she neared the Chief Cornstalk Hunting Grounds, a large man-shaped figure walked out onto the road. As the woman slowed her car, the figure spread two large wings and took off. Ironically, the witness did not report the incident - "Who would believe us, anyway?"

The first sighting which received publicity, though, was one in 1965. A woman living near the Ohio River related how her son had told her one day of seeing "an angel" outside. She thought nothing more of it until about a year later.

In the summer of 1966, a doctor's wife in the same general area said that she had seen a six-foot long thing resembling a "giant butterfly". On November 12, five gravediggers (how appropriate a profession!) saw something which looked like a "brown human being" fly out of the trees near Clendenin. One of the witnesses, Kenneth Duncan, said that they watched the creature for almost a minute. 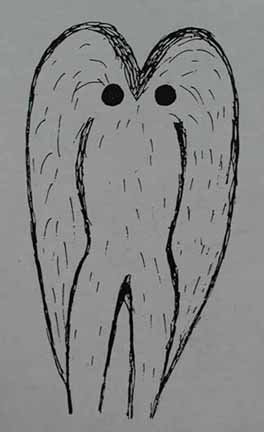 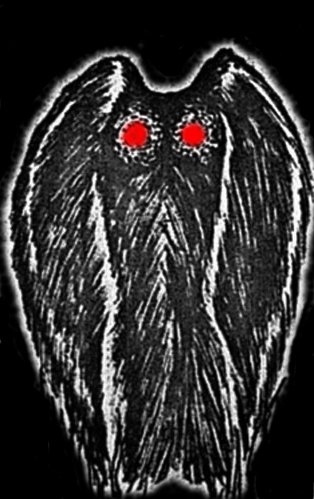 As you can see from the sighting sketches...it looks like a giant...ah...moth.

It looks like some of the crap people came up with in art class. It's like a big foot with no head!

I've been hearing a lot lately about the Mothman. I came across the movie with Richard Gere which I almost fell asleep to. Then...I saw a clip of a documentray about all the weird crap that happened in West Virginia. I fell asleep watching that too. So, I figured making a post about it will keep me awake!! 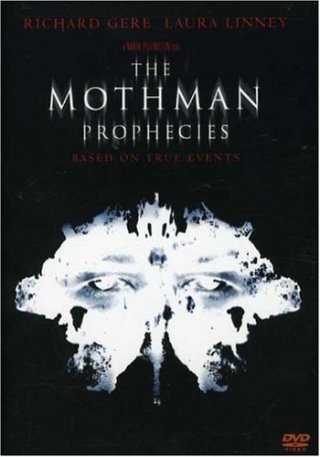 On the 14th of the month, Salem resident Newell Partridge saw two red objects hovering above a field. His German Shepherd, Bandit, took off into the field and was never seen by Partridge again.

The next night, Mr. and Mrs. Roger Scarberry and Mr. and Mrs. Steve Mallette were driving near the "TNT Area", near the town of Point Pleasant. A tall figure stood by the side of the road. "It was shaped like a man, but bigger," said Mr. Scarberry. "Maybe six and a half or seven feet tall. And it had big wings folded against its back." His wife commented on its huge red eyes, "like automobile reflectors."

Mr. Scarberry, who was driving, took off in his car at "better than a hundred miles per hour," the figure spread its wings and flew after the car. It didn't seem to flap its wings at all, and its wingspan was over ten feet. Mrs. Mallette said that it made a squeaking sound, "like a big mouse." The four also noted that a dead dog had been lying by the side of the road, but was gone when they returned.

They went to the offices of the Mason County sheriff and reported their sighting. Deputy Millard Halstead returned to the TNT Area with the four, and said that as he passed the spot where they had initially seen the figure, his police radio made a sound similar to a speeded-up record.

The TNT Area, which seemed to be a sort of home for the "Mothman," as it was quickly dubbed by the press, is a large tract of land. Small concrete "igloos" dot the landscape, used during World War II to store ammunition. The TNT Area is adjacent to the 2,500 acre McClintic Wildlife Station. The entire area is covered with dense forest, steep hills, and riddled with tunnels.

The area is also sparsely populated. One of the families living in the area is that of Ralph Thomas. On the 16th, at about 9:00 pm, Mr. and Mrs. Raymond Wamsley, Mrs. Marcella Bennett, and Mrs. Bennett's daughter, Tina, were visiting the Thomases. On the way there, they watched a red light which circled the TNT Area. When the car pulled up in front of the Thomas', it disturbed something.

It seemed as if it had been lying down. It rose up slowly from the ground. A big gray thing. Bigger than a man, with terrible glowing red eyes.

The witnesses ran to the Thomas home, where they were let in by the three children. The figure shuffled along behind them, coming onto the porch and looking through the window. Mr. Wamsley called the police, but the thing had, of course, vanished by the time they arrived. Mrs. Bennett, who lives at the edge of Point Pleasant, says she has heard the creature on other occasions. She describes the sound it makes as "like a woman screaming."

Paul Yoder and Ben Enochs, two firemen, said they had seen Mothman in the TNT Area on the 18th. Richard West, of Charleston, called the police on November 21. A winged figure was sitting on the roof of his neighbor's house, he said. The six-foot tall figure had a wingspan of six or eight feet and red eyes. It took off straight up, "like a helicopter."

Tom Ury was driving along Route 62, near the TNT Area, on the morning of November 25. He saw a large, grayish figure standing in a field. Then it spread two large wings, lifted straight into the air, and flew over Ury's car at an altitude "three telephone poles high"--probably about 50 or 60 feet. The next day, Mrs. Ruth Foster of St. Albans said the creature was standing in her yard near her porch. Her description tallys with West's. The same day, people in Lowell, Ohio, saw several large birds flying over Cat's Creek. The three witnesses followed the birds in their car and said that they were "...dark brown with some light flecks. Their breasts were gray and they had five- or six-inch bills, straight, not curved like those of hawks or vultures." The birds seemed to have reddish heads.

And still more sightings came. On November 27, on the way home from church, Connie Carpenter saw a grayish figure standing on the golf course near Mason. The creature took off and flew straight towards her car. She was one of few who actually saw the creature's face, although her description--"It was horrible"--doesn't help much. Another sighting took place that same night in St. Albans, where two girls saw the creature near a junkyard. The creature flew after them.

On December 4, five pilots at the Gallipolis, Ohio, airport saw some sort of giant bird flying at about 70 miles per hour. Its wings weren't moving, and unlike other witnesses they commented on a long neck.

Mabel McDaniel (coincidentally, mother of Linda Scarberry, one of the first witnesses) saw Mothman on January 11, 1967. Mrs. McDaniel said that at first the creature looked like "an airplane, then I realized it was flying much too low. It was brown and had a wingspread of at least ten feet." In March, an Ohio man claimed his car was chased by a flying creature.

The last sighting seems to have come on November 2, shortly after noon. Mrs. Ralph Thomas (from Bennett's sighting) heard a "squeaky fan belt" outside her home and saw a "tall gray figure" moving among the concrete domes in the TNT Area.

Scattered sightings continued for several years afterwards. In 1968, especially, a number of hairy humanoids with glowing eyes were seen on Jerrico Road. And on September 18, people in the TNT Area supposedly saw Mothman once more--putting in his last appearance, it seems.

In late 1966, when the Mothman reports started to die down, other phenomena started up in the area. Several UFOs were seen near Point Pleasant, animals were mutilated in surrounding areas, and Mothman witnesses reported poltergeist and "men in black" phenomena. This has led many a researcher to speculate on a connection between Mothman and UFOs.

But no discussion of the Mothman phenomenon would be complete without recounting the story of the Silver Bridge. On the evening of December 15, 1967, the Silver Bridge, which crossed the Ohio River at Point Pleasant, collapsed in rush-hour traffic. Over forty-six cars fell into the river. It was the biggest disaster ever to hit Point Pleasant.

Of course, it was only a matter of time before people began to connect this disaster with the Mothman sightings. Was Mothman some sort of warning sign of the impending disaster? Was the entire saga somehow connected with the UFOs seen in the area?

As a final postscript, New Haven farmer Ernest Adkins reported something very odd indeed in April of 1969. He found his eleven-week-old beagle lying dead in his front yard. "There was no evidence the dog died in a fight," Adkins said. What made it strange was the fact that the dog's chest was chewed open, and its heart was lying outside.

Not surprisingly, most scientists scoffed at this theory. They said it was probably just some normal kind of bird; the favored culprit was a sandhill crane. These large birds have reddish patches on their heads (accounting for Mothman's "red eyes") and a large specimen would reach roughly the size attributed to Mothman. But other birds were found in the area that could account for the sightings. In July of 1967, several boys found a large vulture near New Haven. And at Gallipolis Ferry, a farmer shot a rare bird indeed--an Arctic snow owl. The owl was two feet tall and had a five-foot wingspan.

Via: The Legend of Mothman