How To Make: Yarn Ball Ornaments

US Postal Got Beef With Santa?

The postal Santa has regained his wings.

Letter carrier Bob McLean had been donning a Saint Nick costume for the holiday season while on his route in Bellevue, Wash., for over a decade. But a supervisor earlier this week told him that he was no longer allowed to spread his brand of holiday cheer, alleging that a complaint was filed that he was not wearing official post office attire.

After a hearing yesterday, McLean was told he can wear the outfit again Friday when he delivers the mail.

"There will be a Santa in Bellevue," McLean told The Bellevue Reporter. "I'm just glad it's all resolved."

Earlier, he was pretty upset about being told not to wear the costume.

"The government is shutting me down because it's a non-postal regulation uniform," McLean, who has been working with the postal service since 1971, told The Bellevue Reporter. 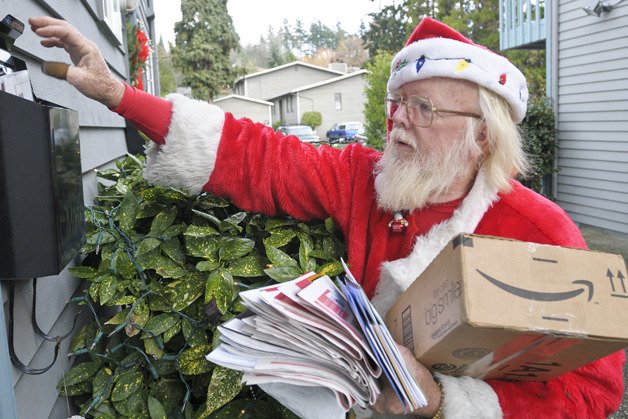 McLean, who wears a white beard and has crisp white hair, said that he began wearing the costume when he was told that he looks a bit like Kris Kringle. Since then he has delighted residents while delivering the post, even causing traffic jams as motorists try to get a peek. He regularly visits the Aegis Living of Bellevue senior center as Santa, and at Bellevue's most popular Christmas attraction, Snowflake Lane, people lined up to take photos with him.

But this year when he was told that he must stop, he didn't take the news sitting down. USPS spokesman Ernie Swanson said the complaint came from a fellow carrier; McLean says that he believed it may be management's decision, but he is unable prove it. No one has come forward and said they had a problem with his costume, he told ABC News.

McLean said that the first reason that he was given for not being able to wear the suit was safety, followed by the fact that it was not a proper uniform. Finally a direct order came down, which he says he couldn't disobey.

"This was the first time; I don't know what happened. I don't step on anyone's toes," he said, adding that dressing as Santa isn't religious to him, "it's secular. It's about giving."

His union filed a grievance over the matter, and it was resolved in a meeting Thursday.

The Postal Service, which is losing billions of dollars each year, apparently decided that it was no use fighting Santa Clause with so much on its plate.

US Postal Service tries to stop an employee from dressing like Santa on his route. What idiots.