Nicholas Cage a Vampire (Photo to Prove it)

Is Nicholas Cage a Vampire?

I always knew there was something off about Nicolas Cage, and not just his drunk and disorderly behavior, penchant for wacko baby names, or his eyebrows. I mean, that's like every other celebrity you throw a rock at on the street. Isn't it strange that the supposedly 47-year-old actor looks virtually unchanged since his first big hit Moonstruckall the way back in the '80s? Well, Jack Mord and I don't think so. And the Seattle photo archivist has a photo to prove it.

He claims the Civil War photo at left is none other than Nicolas Cage. And looking at it, there can only be three possible explanations:

1. It's a fake (Mord says it can be proven authentic).

2. It's a guy that just really looks like Cage, and Cage's youthfulness is due to plastic surgery tips he picked up from his co-star Cher while filming Moonstruck.

3. The photo proves Nicolas Cage is really a vampire!

I'll admit there are some holes in this theory. For some reason, Mord's auction of the photo on eBay today (for a cool $1 mil) was either pulled by the site or Mord himself, but not before explaining the origins:

"Personally, I believe it's him and that he is some sort of walking undead/vampire, etcetera, who quickens/reinvents himself once every 75 years or so. 150 years from now, he might be a politician, the leader of a cult or a talk show host. My theory is that he allows himself to age to a certain point, maybe 70, 80 or so, then the actor 'Nicolas Cage' will 'die' ... but in reality, the undead vampire 'Nicolas Cage' will have rejuvenated himself and appeared in some other part of the world, young again, and ready to start all over."

Mord seems like a legit guy, running a website called The Thanatos Archives, an "extensive collection of early post-mortem and memorial/mourning photography dating back to the 1940s." In other words, the photos are really, really old, like the stuff you had to develop in dark rooms back in the old days using lots of chemicals, chemicals that could get you high without the proper ventilation ... 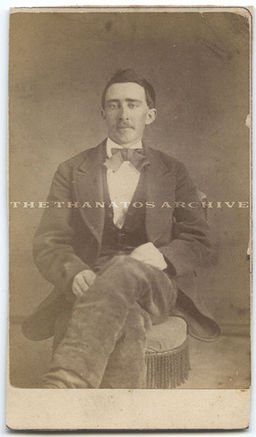 Is this really Nicolas Cage?

"Personally, I believe it's him and that he is some sort of walking undead/vampire, etcetera, who quickens/reinvents himself once every 75 years or so."

and has he been living for thousands of years and goes unnoticed?