Earth Quake in Jersey. Messes up front of house.

Quakes Reported in NYC and NJ. 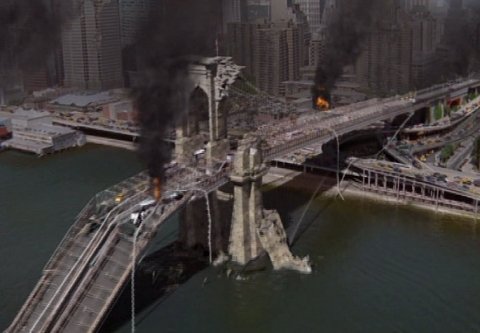 NEW YORK, NY – Conflicting accounts of scattered earth quakes are reported in New York City and northern and southern New Jersey. The Port Authority Police bureau of emergency called to trimmers that have caused the Manhattan Bridge to fracture. New York fire department personal are on the scene and have put out 3 big fires. No injuries or deaths have been confirmed. Traffic is backed up for several miles and there are detours all over Manhattan, Brooklyn and Long Island.

Fractured aerial view of Manhattan bridge. Traffic is heard to be backed up for miles. 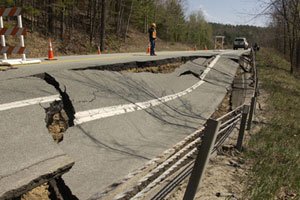 Scattered parts of New Jersey have also felt strong trimmers that have caused houses to sink, miles of streets to crackle. Reports just in that the Hudson river is overflowing and flooding streets in Hoboken.

Police are reporting several hundred people missing from cars on the bridge. John Podderi, a person driving across the bridge said he noticed many drivers missing from their cars when he got out of his delivery truck. Police are reporting that people reading this story are idiots if they believe this is actually the Rapture. It's just some bloggers bored on a beautiful May 21st Saturday afternoon.