Shepard Fairey and Kenny Scharf in The Simpsons

Shepard Fairey + Kenny Scharf to appear in THE SIMPSONS 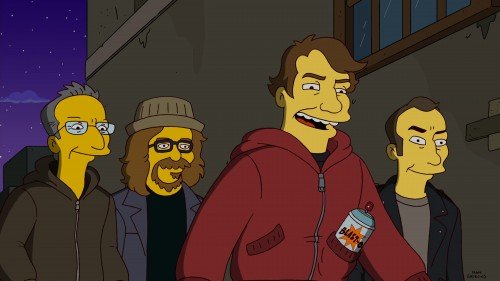 Wow, not sure what it means to be on The Simpsons as a cameo but I imagine it's got to be pretty fuckin' cool! The seminal Matt Groening animated sitcom celebrated its landmark 500th episode last night. In the wake of this news, the Hollywood Reporter learns that some famous graffiti artists – some of whom we’ve covered in these pages – will be joining the cast for the March 4 episode.

The episode is called “Exit Through the Kwik-E-Mart,” an obvious homage to Banksy’s Oscar-nominated film from 2010 (Exit Through the Gift Shop), and focuses on Bart’s newfound fascination with street art. Shepard Fairey, Kenny Scharf, Ron English, and Robbie Conal all cameo as the crew who busts Bart and Milhouse in the act of vandalism. 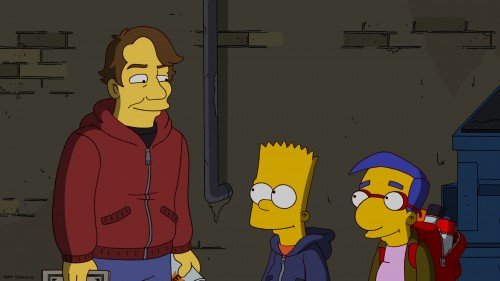 In order to get back at his dad, Bart goes undercover as a graffiti street artist and plasters Homer’s unflattering image all over Springfield. But one night, Bart and Milhouse get caught in the act by established street artists Shepard Fairey, Ron English, Kenny Scharf and Robbie Conal (guest voicing as themselves), and to Bart’s surprise, they invite him to exhibit his satirical artwork in his very own gallery show.

The Simpsons has been one of my favorite shows since the early 90′s. When I was running my screen printing studio in Providence R.I. my crew and I lead a Spartan existence consisting of long hours and a seven day work week. Our only recreational indulgence ritual was to stop work early Sunday evenings to eat dinner together while watching the Simpsons. I’ve always loved the Simpsons blend of humor and social commentary, so it is a huge honor for me to appear as a guest character on the March 4th episode.

Bananas: Cure for Depression??
Santeria/Black Magic Hex on City Manager
A Horror Worse then Dying
Beetlejuice had Herpes
And Now, A Word From Santa
Jesus Piece