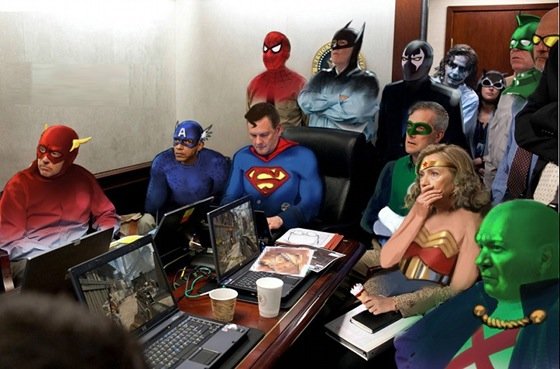 The photograph of President Obama and members of his staff monitoring the raid on Osama bin Laden has quickly become one of the most-viewed images in recent memory - and has also generated some online humor.

Despite the deadly-serious nature of the original photo, people immediately began digitally inserting other images into the picture, including celebrities, Royal Wedding participants, video-game controllers, and even animals.

Among them: the "grumpy flower girl" first seen on the balcony during the Royal Wedding; a bug-eyed cat; a dinosaur; and Keanu Reeves.

Now comes arguably the most "super" take on it: the national security team has been clothed in super-hero garb.

The amazing Super Friends that offed the super villain of all villains - OBL!