Edward Snowden quote on being a patriot

Posted | Views: 9,434
How did you discover photography and how has it developed over the course of your career?
I think the first time I remember being into photography was when I got a 35mm auto for a
birthday when I was 10 or so. I took the camera everywhere but I didn’t take that many pictures. I
guess I couldn’t find anything exciting to photograph from my position in life.
Since then I’ve gone through two college programs, moved at least 10 times, visited a couple countries, and cultivated colorful friendships with interesting people. I think through all of these experiences I began to see differently and use my camera to define what I see. Nowadays, I take pictures with lots of space and color in them. I also take a ton of pictures, ­like 1,400 to make one final piece. Someone told me once that the best photographers have taken the best pictures….and also taken the most bad pictures. It’s a constant learning experience and I like that I’m evolving with it.
Your work shows the duration of time in a photo. How did you discover that technique?
I’ve seen people condense time into single images before; ­I didn’t invent the technique. Mostly
I’ve seen it used to compress frames from a movie into some sort of painterly representation of
the whole movie. As with the history of photography ­ it’s all been done before. I’m a firm believer that if I’m going to make a picture and use a style that exists, which they all do, I had better devote my entire strength to it and do it the best.
Eadward Muybridge is one of my most influential figures in the history of photography because
over 100 years ago he did invent a new technique that expanded peoples minds and condensed
their sensibility about the universe. I took a process and made it my own because it gives me the platform to express my ideas of expanding the frame of the camera, capturing elemental
transitions and creating a sense of figure-­ground reversal. I hope that the process somewhat
evaporates as people start to understand the ideas intertwined into each slice in the pictures.
NIGHT INTO DAY
CHAT WITH PHOTOGRAPHER
SEAN
DECKERT 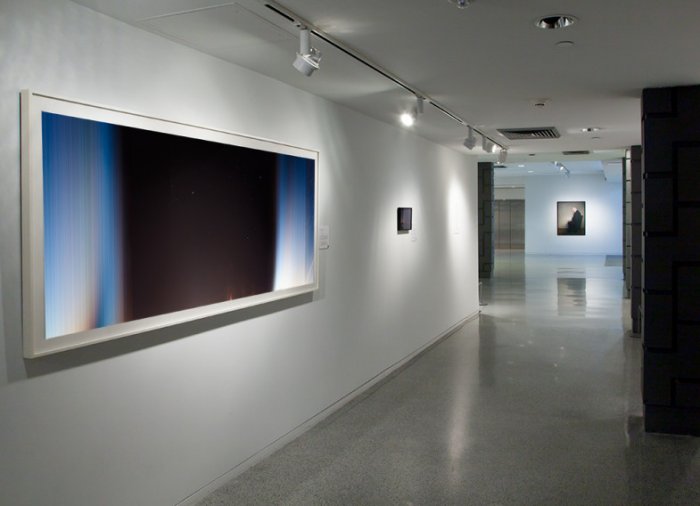 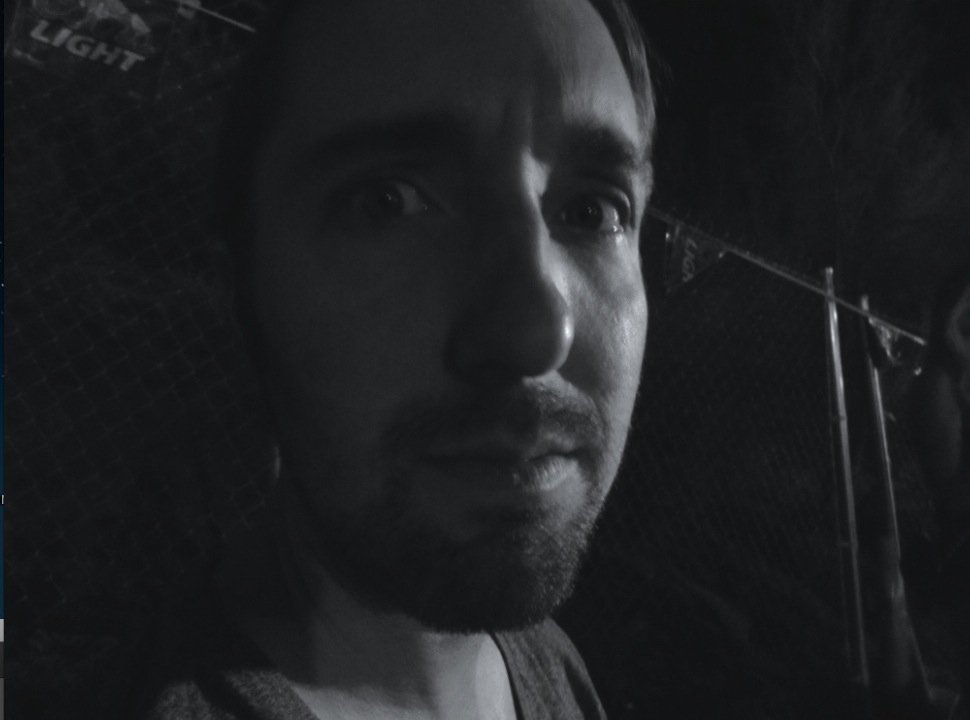 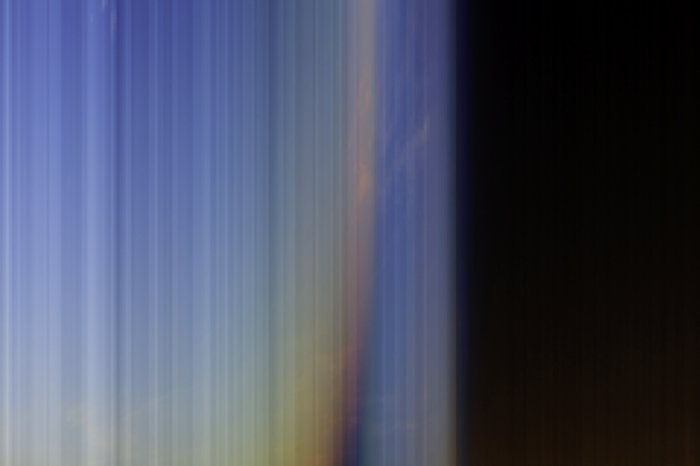 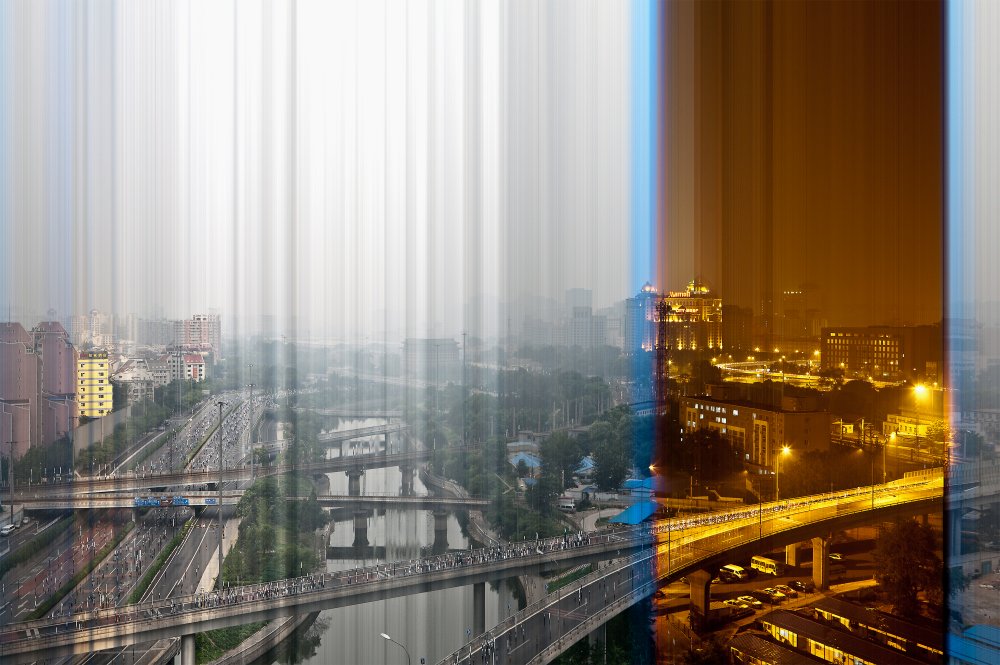 (Interview continues below)
How do you decide the content you want to investigate and shoot?
Most of my projects are circumstantial. What I mean is that they develop out of what is happening in the world and my life. I try to interpret what I think about these two positions and how they relate. Then I look back at what I have done and where I can go with it. Also, I try to design projects that challenge my skill level so that I learn a new way of working. Right now, I’m hotographing the sky and doing a lot of timelapse. About three years ago I made a series of lenticular prints titled Smoke & Mirrors which were a reaction to climate change in Phoenix. I think I’ve been focusing on that since then and always trying to reinvent my style while holding tight to the concepts I’m interested in.
Photographing exhibits seems to be something you engage with your company. Tell us more about it and the experience of being involved in capturing installations of exhibitions.
I had the opportunity to work on a project at ASU Art Museum with an artist couple from Athens. I was the ‘student’ photographer interning under them and learning about relational aesthetics through their project. Contradictory to social practice I was looking at blue chip gallery websites and reading a lot of their resources on contemporary art. At the closing of the exhibition I turned in all of my photographs. I did such a good job they hired me for the next year to work on a wide range of projects and my images were used for national grant applications, catalogues, press and seasonal brochures. It was an excellent way to be introduced to my arts community. I also got to meet some important artists such as Chip Lord, Miguel Palma, Julianne Swartz and work directly with many of them on projects. It is a symbiotic way of working commercially without confusing my artistic reputation. 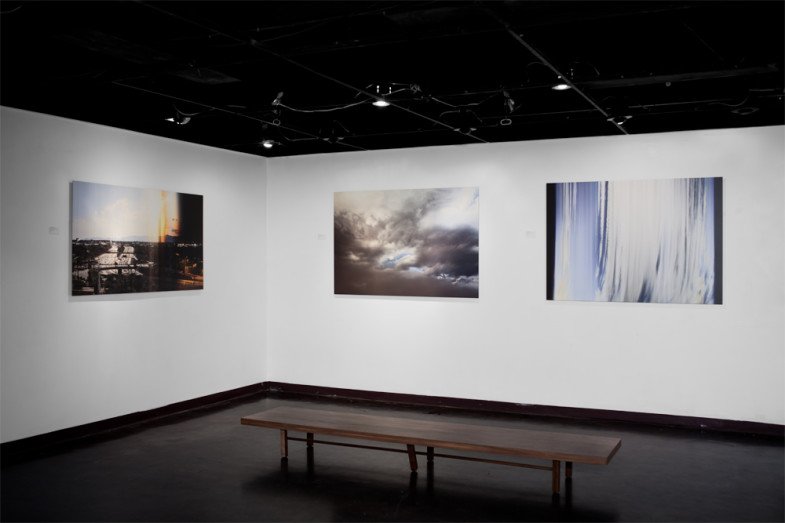 (Interview continues below)
You were the official photographer for the Phoenix popup exhibit CROSSCURRENT. How was that different from past experiences working with artists and galleries.
Many of the projects I’ve worked on are with museums or established programs which means its got a fair amount of certainty in the timeline and structure. CrossCurrent was different because it
was built from the ground up in a  short amount of time by a small group. I signed on not knowing
exactly what was going to happen although I was confident in the groups ability to pull it off. It
was exciting because during the month there were revelations, sales, new friendships, fancy parties and a lot of photography. I shot all of the art prior to installation, which never happens. I was sending out files to the group immediately to use for press on a seemingly daily basis. There was a lot of energy and a collective desire to make it an explosion in Phoenix, which I think is what ended up happening.
Tell us about the project you were apart of in Israel a little while ago.
Israel was grass roots. It was a long process and it’s still happening. It started through an artist, Meirav, from Agrippas 12 Gallery in Jerusalem visiting Phoenix with her husband. He worked for IBM and there’s an office here. She came to downtown Phoenix and wandered into the gallery co­op I was part of, Eye Lounge. My friend Crystal met her and introduced her to the gallery owner Greg, who had lived in Jerusalem for two years. Eye Lounge came up with the idea of having a traveling show with Agrippas 12. Fast forward a year. Crystal moved and I took over the project. We teamed up with ASU Art Museum’s Desert Initiative and had four exhibitions in two countries. Eye Lounge artists shipped work to Israel and had a show for the season opening in Jerusalem, referred to as Manofim. We exhibited at Agrippas 12 twice and at THE Gallery in the Negev Desert once. The Israeli artists work was held up in customs for four months!!! So we pushed their show until we got the work. Currently, Meirav and I are putting something together dealing with discarded roads in remote areas of the desert. We wanted to keep the focus on ‘arid’ because the landscape and climate are what brings us together. More to come...
Tell us about the photo you are currently exhibiting at the Phoenix Museum of Art
So, last year I was awarded the Emerging Artist Grant from Contemporary Forum at Phoenix Art Museum. The award was a check to finance a new piece and a wall space at the museum once the work was made. That year went by so fast I couldn’t even believe it. I decided to use this opportunity to refocus my studio practice and slow down, which meant make less work on a
bigger scale. I refined my understanding of the time lapse process and why I was so interested in it. I think I was trying to create a overly beautiful image that was also disjointed or destabilizing in some way. I made “Day Into Night Into Day” during the winter over a two day period of shooting and a couple of weeks assembling the image. I spend quite a bit of time with proofs looking for something wrong with this piece. I was excited that this piece had achieved a sense of
continuum with this work as well as a the scale I needed to take over the viewers peripheral sights. I thought of this work as a sort of scroll and was also keeping in mind my experiences in Beijing and the ways Chinese masters depicted the sky.

What's next for you? I heard you may be moving to LA in the near future.
Indeed LA! I was born in Culver City 30 long years ago. Back then it wasn’t full of galleries and studios and I didn’t know I was going to grow up to be an artist. I only lived there for two years but I’ve always wanted to return and have the experience of living there as an adult. Now, it seems the stars have aligned because I have a purpose living there.
My girlfriend, Josselyn, and I are planning on moving next summer. I feel like I still have a lot of opportunity here in Phoenix so I don’t want to leave till it’s the right time. Also, Phoenix is so close that I plan on splitting my time between the two cities. I’ve started a company called Calnicean Projects and I hope that these aren’t the only two cities I’ll be splitting my time between. The
company caters to career artists, galleries, museums and design firms and produces visual documentation and design services. The team is in place and we are working on building and already impressive client list. Everything is in flux right now and I’m very excited for this year!
To learn more about Sean Deckert,
check out his website right here.
We had a chance to have an insightful convo with photographer Sean Deckert. The up and coming photographer talks about his process, recent shows and future discoveries. Enjoy