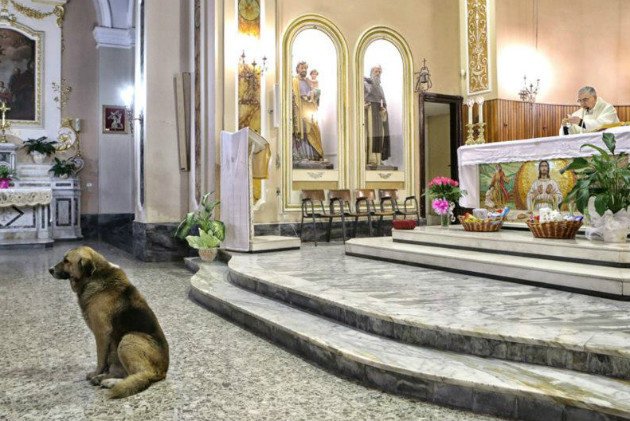 After Lochi died, the dog "joined mourners at her funeral service" according to locals and "followed after Maria's coffin" as it was carried into the church.

Tommy, a stray who was adopted by Lochi, has been showing up "when the bell rings out to mark the beginning of services" ever since.

"He's there every time I celebrate mass and is very well behaved," Father Donato Panna told the paper. "He doesn't make a sound."

None of the other parishioners has complained, Panna said, and villagers give the dog food and water and allow him to sleep nearby.

"I've not heard one bark from him in all the time he has been coming in," Panna added. "He waits patiently by the side of the altar and just sits there quietly. I didn't have the heart to throw him out—I've just recently lost my own dog, so I leave him there until Mass finishes and then I let him out."

A loyal dog whose owner died late last year has apparently been showing up for Mass every day for the last two months at the church where the funeral was held.

Tommy, a 7-year-old German shepherd, used to accompany his owner, Maria Margherita Lochi, to services at Santa Maria Assunta church in San Donaci, Italy, according to the Daily Mail, and was allowed to sit at her feet.