The worst drought in modern history has destroyed more than half the nation's corn crop, pushing prices to record levels.

Livestock producers across the country are feeling the pinch as they struggle to feed their herds.

To cope, one Kentucky cattle farmer has begun feeding candy to his 1,400 cows.

"It’s so hard to make any money when corn is eight or nine dollars a bushel," said Nick Smith, co-owner of United Livestock Commodities in Mayfield, Ky.

The candy, which has been rejected from retail sale, makes up from 5% to 8% of the  cattle's feed ration, Smith said. The rest is a mixture of roughage and distillers grain, an ethanol byproduct.

And so far the candy's high caloric content is fattening up the cows quite nicely, he said in a phone interview.

"That's awfully creative," said Paul Cameron, managing partner of Mesquite Cattle Feeders, an operation that feeds up to 35,000 heads of cattle in Brawley, Calif. "He’s probably at an advantage by doing that."

Cameron, who also heads a California Cattlemen's Assn. feed committee, said he hasn't heard of livestock producers in this state using candy in their feed rations.

"I think that’s extremely unusual," he said. "I know there are people that feed vegetables and potatoes and stuff like that. And they’ll use stuff like that to offset the high price of grains, but I've never heard of that."

Smith, who said he is baffled by the some of the media attention, said his cows will be eating corn again as his farm is now harvesting the corn that they grow. 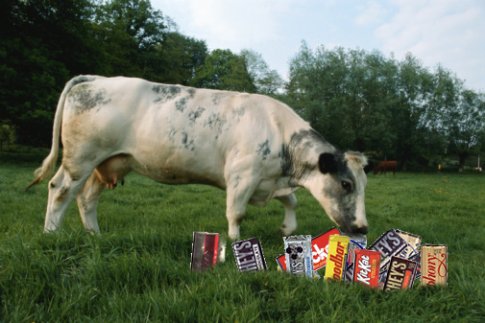