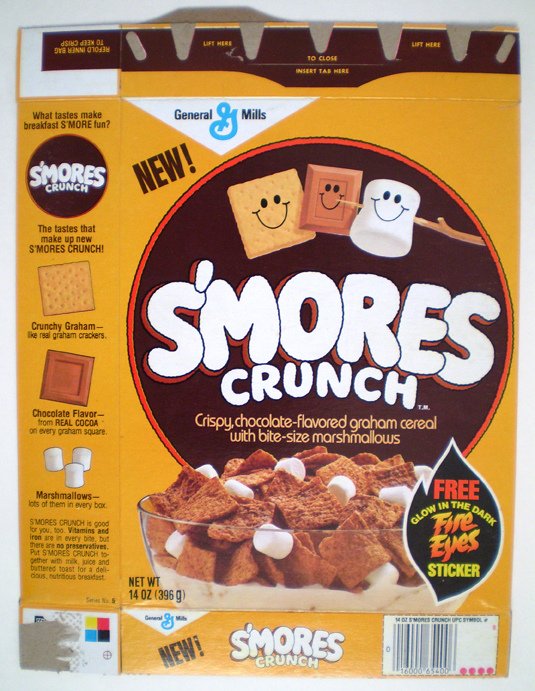 My Super Bowl of cereal

whatever happened to S'mores Crunch cereal? Man, I loved this when I was a kid. If it was only 1985 again. General Mills fucks up everything. Kellogg's can't even clean up your mess.

S'mores Grahams (a.k.a. S'mores Crunch) was a short-lived cereal produced by General Mills. This cereal was similar to Golden Grahams with a blend of chocolate mixed in. It consisted of chocolate graham cracker cereal pieces and tiny marshmallows pieces similar to those found in packets of powdered hot chocolate mix. It was launched in 1982 and discontinued in 1988. General Mills later resumed S'mores Grahams production throughout the late 1990s, but it has since been re-discontinued.

The cereal's mascot was the S'morecerer (an animated sorcerer). Ads with this mascot would feature a couple of kids trying to get to the cereal but then encountering a conflict (such as getting chased by a lion or their sail getting hit by lightning), then the S'morecerer would appear and transport them right to the cereal. It would usually end with one of the kids saying the tagline, "Can I have s'more?"

The prize in every box of S'mores Grahams for many years was a small pack of Starburstcandies.

Kellogg's introduced a similar cereal in 2003. This version (named Smorz) featured larger marshmallows and "puffs" as the cereal-base, as opposed to the Golden Grahams style pieces of S'mores Grahams.