Some Dude Gets Plastic Surgery to Look Like Superman

A man in the Philippines has had multiple cosmetic surgeries in order to look like Superman.

Reporter Marie Lozano of Bandila news Tweeted this picture earlier as a teaser to her upcoming story:

With the translating help of the lovely Maureen F. from our doctor advisory team, we’ve been able to suss out some of the details of this story.  We’ll continue to update as we understand more.

According to the report, Superman wannabe Herbert Chavez, 35, has been going under the knife since 1995 to achieve his heroic appearance.  So far he’s had:

Speculated (just look at the before and after!) 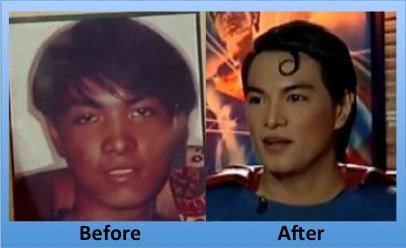 In the segment, a psychiatrist (who has not treated Chavez) suggests he has Body Dysmorphic Disorder, meaning he's obsessed with making cosmetic changes to his body.

Chavez is said to be a pageant trainer -- though we’re not sure exactly what that means.  Our best guess is beauty pageants -- he does seem to have a thing about perfect looks.  He's also obsessed with all things Superman, as further evidenced by the memorabilia in and outside of his house.

It’s not too uncommon for plastic surgery patients to request celeb faces or features.  But asking to look like a fictional character is different story.  However there are real actors who’ve portrayed Superman, and Chavez’s look seems to be an amalgamation of a few of them.

Extreme plastic surgery like this has always been controversial.  Based on this photo, do you think Chavez took plastic surgery too far in his attempt to look like his fictional hero?