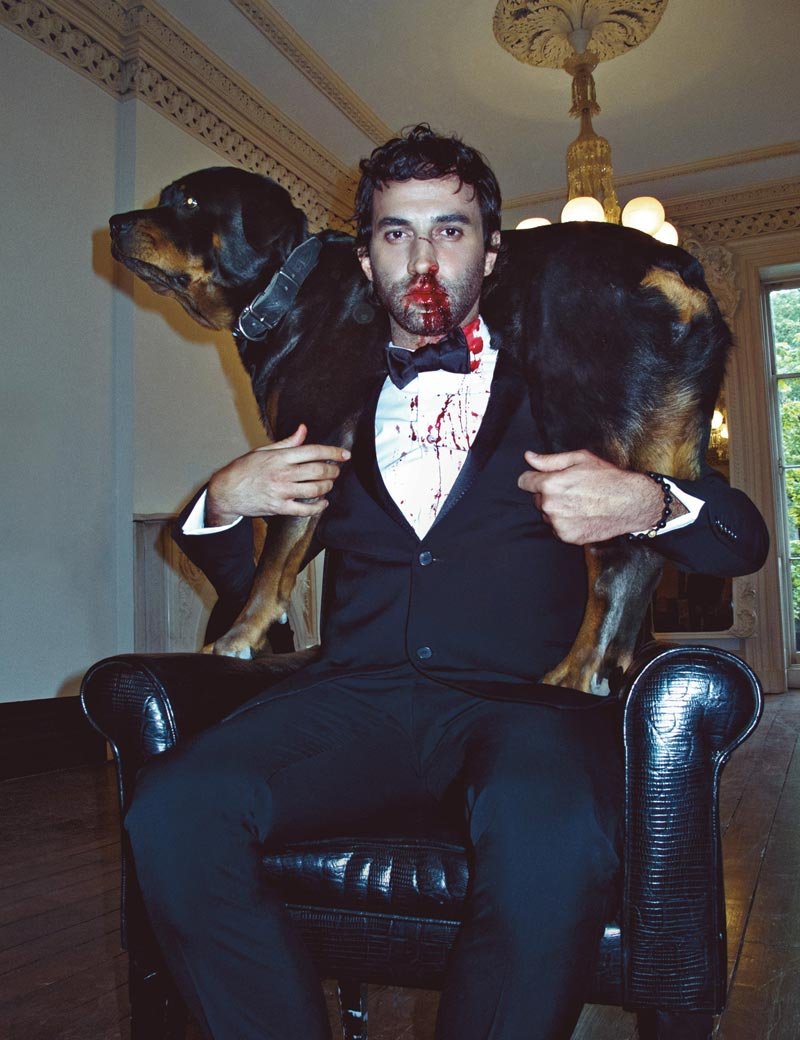 Like any competitive industry, fashion understands the market need for a constant infusion of fresh blood and untapped talent. But among the crop of sartorial prodigies to have emerged in recent years, none has ascended from young upstart to master of the universe as rapidly as 36-year-old Italian designer Riccardo Tisci.

Setting aside the fact that his name flew about amongst the barrage of rumors this past spring over who would fill the golden shoes at Christian Dior, Tisci has become in short turn a maestro of shock and seer of chic, with a magical touch capable of blending a rebellious love of goth and the deep urban street with a refined sense of style and sexuality. It’s hard to believe that it’s been only six years since he was placed at the helm of Givenchy—a surprise appointment in 2005 for a brooding art-school graduate with only two previous collections to his name. But if the French house understood that it needed to revolutionize its rather prim mid-century image, then the risk has paid off as Tisci has unleashed surprising collection after surprising collection, mixing influences, genders, fabrics, prints, and silhouettes like he’s making his own personal mixtape. Over time—and with the addition to his portfolio of Givenchy’s notoriously buttoned-up menswear, which he took over in 2008—the mix hasn’t gotten any less diverse. (A transgender model, barking Rottweilers on T-shirts, and Jerry Lee Lewis all found their way into his recent work.) But a single Givenchy mindset has started to stick: highly sexual, almost primal, but tough-as-nails and maybe just a twinge romantic.

Tisci’s Fall 2011 women’s collection for Givenchy has all of the sleek agility of a black panther, which is its signature motif. The romance comes perhaps from Tisci’s background—a very proud Italian, the designer only took his job at Givenchy in the first place in order to support his family. In fact, the Italian in his veins is such an elemental part of his craft that it wasn’t surprising to see a hint of vintage Versace in his most recent collection. He recently spoke with one of his fashion heroes, the also proudly Italian Donatella Versace. 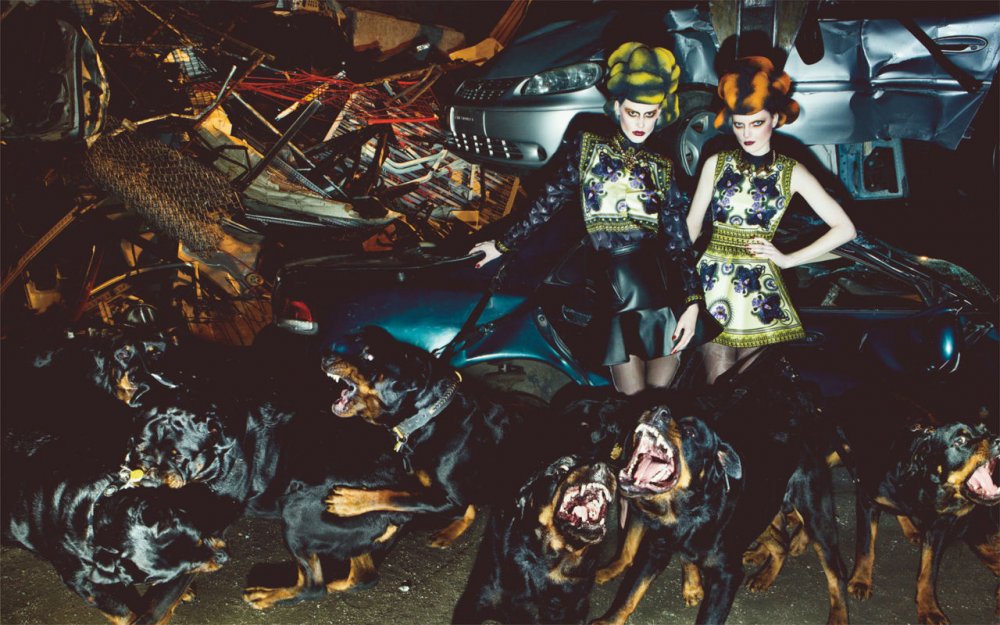 VERSACE: Let’s talk about your last collection, which I found to be very beautiful—super sexy. I would wear all of it.

RICCARDO TISCI: Brava! In fact, as I’ve been saying, it is very Donatella, because it is about a very strong woman. My inspiration comes from many sources, and one of those sources is precisely the maison Versace. You know, when I was a little boy, my family was not very well off. I had a sister who worked in a hairdressing salon. I lost my dad when I was 4 or 5 years old. I grew up with eight sisters and my mom. Nine incredible women all a little “à la Donatella Versace.” Real strong women from the South of Italy, women who had sensuality. They had a confidence in their body and in their sensuality. And it was a poor family, I am very proud to say it.

VERSACE: I find the idea of having eight sisters to be a veryjovial thing.

TISCI: Absolutely. And even if they didn’t have the financial possibilities of dressing themselves fashionably, they were women with an elegant style. The elegance of the South is a very strong elegance and it is one that I bring. It is a sexy elegance—or at least, let’s say less chaste. It was also the late ’70s and the ’80s, which was a certain moment of Versace—especially for me with a sister who worked at a hair salon and brought home fashionmagazines on Saturdays. Of course, Versace is, in my opinion, still the flag of Italy; it represents Italy. It meant the arrival of top models, of celebrities, Gianni, Donatella, all the things that made me dream. Those early visions make a big impression.

VERSACE: The early ’90s were an especially marvelous period for fashion, because it was the peak of glamour and there were no limits as to what you could do. But I see that you haven’t stopped pushing the boundaries, pushing forward. There is always some of that in your collections, which I very much admire. There is this passion for fashion and you’ve had so much success in Paris. You are one of the most talented designers there.

VERSACE: Has your initial passion diminished at all? Is it still the same as it always was? Or are you getting used to it?

TISCI: I have to be honest: My great strength, which I very much believe in, is family. For me, family doesn’t simply mean components of DNA. I mean family in the sense of siblings. My mom and my sisters are the energy and inspiration in my life. For me, fashion is a job. I love it. It’s my passion. But the most important thing for me in general is life. I was lucky. From the time I was a little, I was always surrounded by women, and I am very attracted to the feminine world, because I love the strength and romanticism, which in the end, you can find in my style. 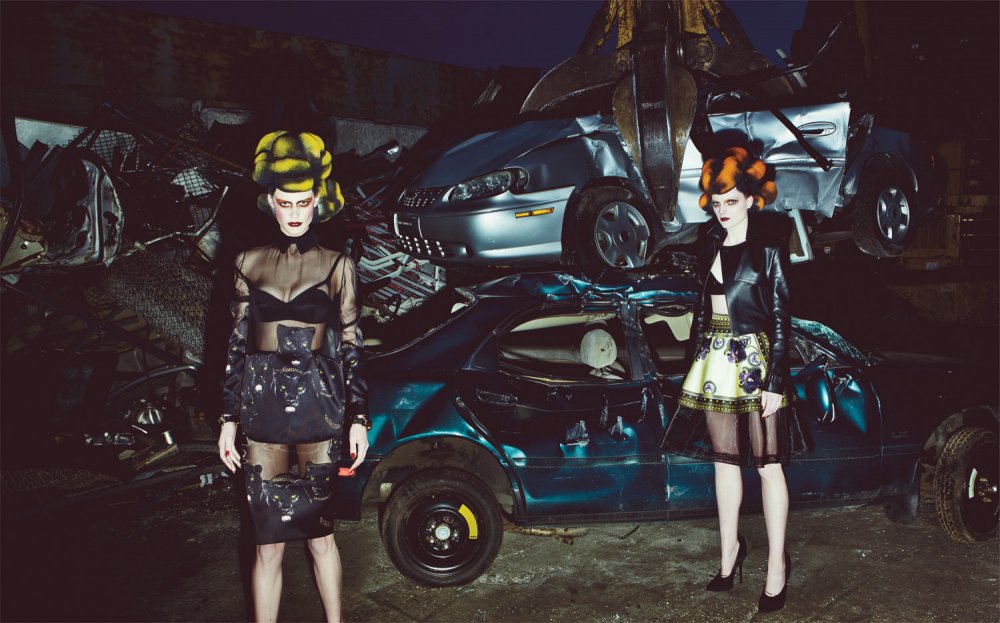