President Obama may have been able to laugh off the mouthful of fingers given to him by 8-month-baby while visiting U.S. troops in Hawaii, but the baby’s parents could not.

“I was mortified.  I was so embarrassed,” Meredith Wagner, mother of the five-fingered culprit, Cooper Wagner, said today on “Good Morning America.”

Wagner, 27, and her husband, Capt. Greg Wagner, 25, were smiling for the cameras with their son and President  Obama on Christmas Day at the Marine Corps Base at Kaneohe Bay, Hawaii, which the president visited while vacationing on the island with his family.

As the three adults struck a pose, Cooper reached up and stuck his tiny fingers in the president’s mouth.

Meredith Wagner saw it all happen and reached up to pull Cooper’s hand away from the mouth of the leader of the free world, while her husband smiled straight ahead at the roomful of photographers, ensuring the moment would be captured in perpetuity.

“I actually didn’t even see it until the president had already left,” Capt. Wagner told “GMA.”

“She had to tell me about it,” he said of his wife.

Meredith Wagner can be seen looking a bit red and embarrassed in the moment, while an amused Obama, a father of two daughters himself, laughs it off.

“He kind of laughed and said that Cooper looked up and saw his big nose and just wanted to get a hold of it,” Capt. Wagner said of the president’s reaction.  “He played it off really well and got a good chuckle.” 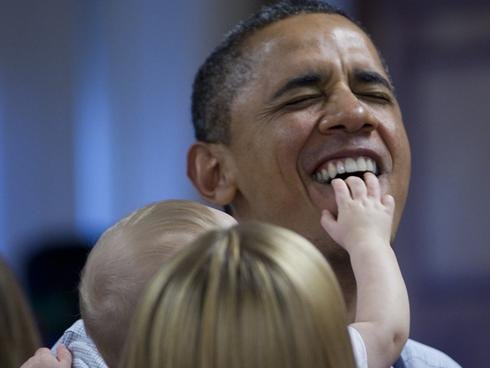