“Does anyone still wear a hat?” This lyric from Stephen Sondheim’s masterpiece musical Company, as crooned out by Elaine Stritch, rung in my head as I found out that master milliner Stephen Jones’s show Hats: An Anthology would travel across the pond from the Victoria & Albert Museum in London to the Bard Graduate Center in New York City this Fall. Though English aristocracy continues to include interesting headwear in their luxe lexicon (remember the Royal Wedding?), are hats still so much a sartorial staple in the United States that they warrant an exhibition?

The introductory tableau sets the scene for the entire exhibit: a small selection of hats that run the gamut from historical (bonnets), to stylish (a dramatic spray of black pheasant feathers), to subversive (a masculine top hat rendered in soft hot pink satin) gives us a taste of the varied and venerable examples presented. Initially what strikes the viewer is the endless possibilities of beauty, from the simple elegance of a fedora to the inexplicable tangle of delicate, colorful feathers that manages not to collapse on itself. 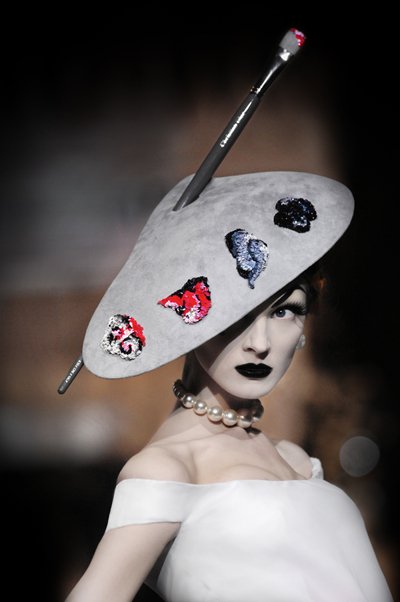 Supplementing these fashion tokens are bonnets, turbans, tiaras, helmets and more, pieces of headwear worn only by royalty, military officers, aristocrats or fictional characters. A replica of Darth Vader’s helmet is on display, next to an authentic Japanese samurai helmet. Mickey Mouse ears mingle with 19th C. Indian crowns. Sarah Jessica Parker’s acorn and butterfly fascinator worn to the Sex and the City premiere plays off of a sable fur hat worn by Napoleon III’s wife Empress Eugénie. A Disney tiara provides contrast to the real diamond-studded deal. The mixture of high and low culture shows how hats, and fashion generally, have come to define important sects of class and taste in the world.

The exhibition also explores the variety of mediums used to create hats, offering creations of feathers, paper, flowers and straw that defy typical expectations of craft. Adjacent to these experiments in handiwork is a mini-vignette of Jones’s atelier, illustrating the hectic process of creation amidst bolts of fabric, tools, magazines and the horrifying stare of Styrofoam heads. Instantly we are transposed from the haute fantasy of headwear into the laborious process of millinery. 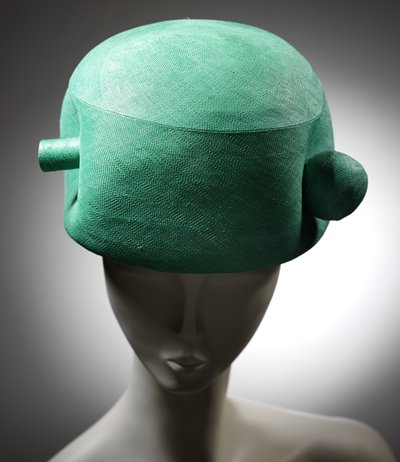 Continue with this article...