Rick Genest (a.k.a. Rico) is 25-year-old model from Châteauguay, Quebec, Canada, who shot to fame after appearing in Lady Gaga’s video for ‘Born This Way’. Known as Zombie Boy, Genest’s body is covered in skeletal tattoos making him resemble a decomposing corpse.

Prior to January 2011, the self-described ‘punk’ was living on the streets of Montréal taking on an array of odd jobs, including working as a circus freak, to pay for his tattoos. A popular local figure, Genest had over 20,000 fans on his Facebook page where Nicola Formichetti, Thierry Mugler’s new creative director and Gaga’s stylist, first found him.

Now serving as Formichetti’s muse, Rico has become the face of Mugler’s fall/winter 2011 line and is enjoying a new found career as a model. Genest has been featured in the spring/summer 2011 edition of Vogue Hommes Japan and can currently been seen in an editorial for nightlife.ca (seen here) photographed by Raphaël Ouellet.

Genest is entirely tattooed from the waist up but says he is not done yet, he wants to extend his body art down his legs and recently had his tongue slit to make him look like a reptile. 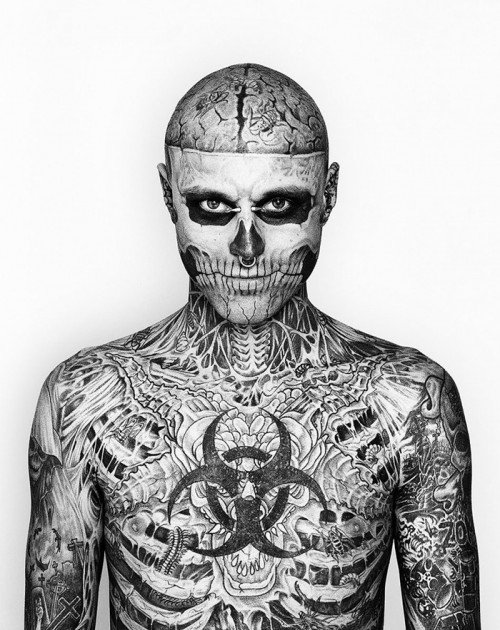 This dude from the Lady Gaga video has some crazy tattoos. Wow.